Since 2002, Frank Adamo has worked with middle school students, helping to promote reading, writing and thinking skills while keeping an eye on edTech and how to best serve growing writers and readers. Frank accomplished National Board Certification in 2010, and he became an authorized Google Education Trainer in 2015. Frank was honored to be recognized in 2016 as an Empire State Excellence in Teaching awardee, and in 2017, he was honored as the Ruth E. Everett Award winner for mentoring by the New York State English Council. Frank currently works with a team of teachers dedicated to helping students to build skills that will follow them far beyond the middle school classroom. Frank has coached at the middle school level since 2002, and having the opportunity to combine skills from the classroom and the athletic field have had a significant impact on his teaching and coaching style.

Rolling into a Classroom Near You: The NYSTEAMBus 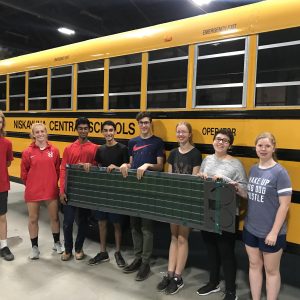 One of the biggest joys of teaching comes from the conversation that you have with a former student who comes back to find you, letting you know that your work helped to ignite their love of something. Sometimes that love comes in the form of a book, sometimes it’s a problem they had to solve. We hope that ours is a bus. The NYSTEAMBus is a mobile STEAM classroom designed to travel to schools, challenging and motivating students to think in uncommon ways. This project started in our media center between myself and Steve Wolfort, our Media Center Specialist, considering how…